[dropcap]S[/dropcap]o, how should Google AdWords PLAs be set up, anyway? Google currently provides a few ways to set up Product Listing Ads (PLAs):

Option 3: Using The Ads Tab In An Existing Ad Group: Not Advisable

Option 3, which can be set-up in Campaign > Ad Group > Ads tab, is not a good option under any circumstance for a few reasons. The primary reason is that a PLA created in this way will be mixed with other ad formats (text, display, video) that may exist within that Ad Group. Text ads in particular will compete with the PLA. The result: either the PLA *or* one of the other ads will display for a search based on the key phrases in that Ad Group, regardless of the Ad Rotation settings. There is no chance of *both* a Product Listing Ad and a text ad displaying at the same time for a search, which is highly desirable.

The image below shows 1 PLA and 3 text ads in the same Ad Group. By adding the percentages in the % Served column, which add to 100%, you can tell that the ads are served one at a time. There is no chance of both the PLA and one of the text ads displaying simultaneously. 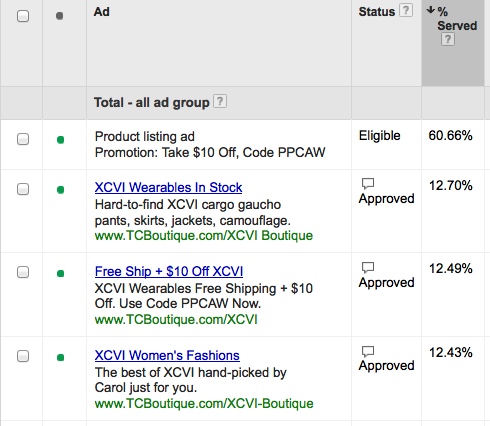 A PLA Created At The Ad Level Of An Existing Ad Group Will Compete With The Text Ads In That Ad Group. The Take-Away: Only 1 Ad Will Display At A Time (add up the percentages)…No Chance For Both A PLA And A Text Ad Displaying Simultaneously.

With Option 2, a PLA would be created as its own Ad Group within a Campaign that contains Ad Groups using other formats (text ads, display ads, video ads), which can be done as shown in the image below.

It Is Possible To Create A PLA At The Ad Group Level.

Obviously, from the image above, Google allows advertisers to create PLAs in this way. And, this option does allow for the potential for both a PLA *and* a text ad to display at the same time for a search. This is due to the fact that, unlike Option 3, the PLA is its own Ad Group, separate from any other Ad Group containing text ads. A screenshot of an example follows. 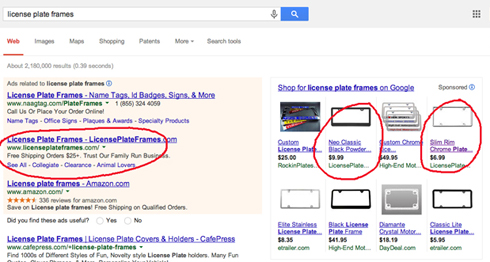 Two PLAs *And* A Text Ad Displaying At The Same Time For The Same Search Is Possible Because The PLA Is A Separate Ad Group.

An additional benefit of this method is that all metrics for the PLA Ad Group like CPA, CTR, etc., as well as bidding, are about and for PLAs only, allowing for more targeted decision making.

However, unless the PLA Ad Group will have just 1 Product Target – All Products – Option 1 is actually the preferred method of setting up PLAs.

Creating PLAs at the campaign level allows for multiple Ad Groups, all dealing with the Product Listing Ad format.

Creating PLAs At The Campaign Level Is The Preferred Method.

The 1st Ad Group created should be one that targets all products, no filters under Product Extensions. Keep in mind, 1 All Products target per Merchant Center feed.

After a bit of time has passed, enough for there to be useful data, the Search Query report will provide a road map as to which and how many PLA Ad Groups to add to this Campaign. Each of those succeeding Ad Groups would then target and filter specific brands or categories or products of the Merchant Center product feed, based on the reporting data. For example, the PLA Campaign may evolve something like this:

Which segments (Ad Groups) to add will become very clear over time based on the search query report.

PLAs set up as its own campaign as described has the added benefit of allowing the advertiser to properly manage a budget, CPA, etc, solely for the PLA ad format.

There is so much more to Google AdWords PLAs. Especially in light of the fact that they will probably disappear in the near future as Google rolls out its new Shopping Campaigns feature, which DMG is beta testing.

To learn more, or to challenge us with your Product Listing Ads business, contact Steve Di Pietro.